Twitter is to RSS what AOL was to the WWW

Okay - I've had enough and need to tell someone. While reading my favorite blog site today I noticed them asking me to follow them on Twitter. I crossed my fingers and hoped that it would be some mindless bantering between Josh & Ryan, but sadly that was far from the case.

People, please ! - Twitter was meant to be for comments/information from people. - I've bent my own rules in the past for the likes of @StatTweets, but this has gone too far.

All these sites which are auto-tweeting based on a blog-post or addition of a news article are starting to annoy me. Google Reader did a nice job acting as a webtop RSS aggregator, but evidently that was too frickin hard for people. - Maybe it's because Google didn't have a cute little bird on their site.

Hence my comparison to AOL for the WWW. - Evidently since people couldn't figure out how to use an RSS reader - they needed a single-site to provide a 'follow me' button. - I'd be much happier had Twitter become a catalog of RSS feeds but since they require you host your tweets on their (often overloaded) system - we're all left to be mystified when they become unavailable. This sounds a lot like people not being able to handle http://www.pizzahut.com and opting for keyword:"PizzaHut"

So -
People, keep-on tweeting.
@CNNBrk - You're the worst offender of all.
@Engadget - Liven it up a bit, talk to us and back at us - but don't just auto-post
@ev - Cash out ASAP, I think Twitter's days are numbered.
Posted by David Stafford at 4:23 PM 1 comment:

...and this boys and girls is why it's important to plan for various browser widths and screen resolutions. 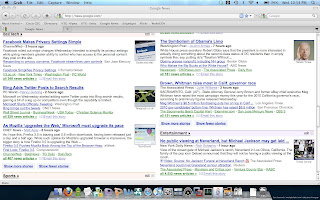 Posted by David Stafford at 11:00 PM No comments: