Tomorrow, Less will be more.

The book, 'The Innovators Dilemma' focuses on the theory behind disruptive innovation in more detail than I care to go into - but I am convinced that in today's complex digital universe - consumers are asking for less not more.

The PC is the Swiss army knife of functionality. Here's a PC that can play music CD's, here's one that can play DVD movies, here is one that has a camera and can be your video phone, want to record live TV ? - Sure, the PC is great and be it Win/Lin/Mac - it can be done. Then comes the PDA (satellite to a computer for contacts/notes), the iPod (satellite to a computer for playing music), the digital camera (satellite to a computer for capturing images). -- Combine them all and you get an early incarnation of a SmartPhone (Ex: Treo). Now days, convergent devices are all the rage. SmartPhones are getting more powerful with web-browsers and full fledged PC applications (ex: iPhone) while you can't buy a GPS or even a Pez dispenser that won't play your MP3's for you.

Here lies the premise of my prediction - the disaggregation of the PC into it's 3 core components (Platform, Apps & Content) will result in consumers desiring greater disaggregation in terms of the features/functions of the devices they carry. Some will see this as the pendulum swinging back for a 2nd time. - First we aggregated into the PC (fixed computer), then we disaggregated into single function devices such as the iPod mentioned above, today we're re-aggregating into mobile computers, and next I predict we'll want to break it up into satellite devices yet again.

What will drive this 2nd wave of disaggregation isn't some new magical device like an iPhone v2, I also don't believe it will be a STUMPc (Super-Tiny-Ultra-Mobile-Pc) despite being a fan of Diamondville, err - ATOM systems. -- Set full disclosure = ON -- It will be the network.

Imagine a device capable of 60fps @ 480 lines of horizontal resolution capable of receiving multiple video streams on a monthly recurring service fee of absofrigginlutely nothing - and you've got this thing called television. Before that you had dozens of audio channels where a single tower in Chicago could broadcast a Cubs game all the way to mid-Michigan, it was called radio. Now today we have all that being re-invented in the form of packets vs. analog signals. Phones once the magic of Alexander Graham Bell and children playing with tin cans and string - are now digital packets being relayed around the world at light speeds.

Reinvention is all about taking something good and making it into something great. In a technology era where standalone technology innovation may be slowing - that is not necessarily a problem - we have turned to 'mashups' to create new and amazing possibilities. How do you 'mashup' stovepipe technologies ? - Tim O'Reilly was quoted saying, "The network is opening up some amazing possibilities for us to reinvent content, reinvent collaboration." Again, a common theme - the facilitator of this era of innovation is "The network..." The glue between the mashups is - "The network..."

We're at a point now where we need very specialized devices which can do one thing extraordinarily well. The end-device (platform) is the human interface, it's the very basis of the consumer experience. Rather than needing to stuff it full of capabilities (apps) - we need to have devices which are appropriate to the types of content we're trying to render.

I don't want to listen to music on my cell phone, I don't need my dog's photo on my GPS. I want all my devices to be subscribed to my content in the cloud. That way my digital photo frame could play my Flickr feed (not some SD card stuffed in it's gills) My car could play my music, not off an iPod with an FM Transmitter, and not relayed off my PC at home - but from my S3 storage library, my presentations wouldn't need to be reliant on my PC behaving well because the inFocus projector would be able to open the files directly, -- hopefully you're getting the drift by now.

Take a look at your own buying habits as a consumer or employee, I encourage you to share your perspective with others - are you looking for fewer devices that technically can do more, or are you looking to have more devices do one thing really-really well ?

Posted by David Stafford at 10:47 PM No comments:

My case against the "WebTop"

Today's post is the result of my good friend Wil attempting to explain why the WebTop is a desirable evolution of the PC.

Actually taking a step back and defining what I think a “web-top” is:
Is this what you hate?
Here is my reply:
I agree with your definition of a web-top.  This is what I hate because the user-interface & experience is being limited to the browser.

The limited browser user experience sucked so Microsoft created ActiveX and the world cried, Sun created Java and the world was just happy that it wasn't Microsoft, Adobe/Macromedia created Flash and the world cheered. Now AJAX is all the rage (because nobody could accept that DHTML came out of Redmond) and Google Gears and Adobe AIR are rushing in to fill the off-line void.

In the web-top model, the advancements in hardware capabilities are being ignored.  Hardware is what provides the human interfaces, be it Aero, Aqua or Flash as well as pens, cameras and gesturing.  Everything Intel is doing with Atom is trying to bring more hardware capabilities to more devices, in a smaller form factor at a lower cost-point will be the equivalent of flying cargo in the 1st class seats of a 747 if all it needs to provide is a browser.

Apple has proven that the human experience matters above all. Google has proven that performance & simplicity are important at a service layer.  Parallels Coherence Mode, VMWare Fusion's Unity and MetaVNC all point to the value of having a 'Mashup Desktop' where local native, local virtual and remote presentation applications can coexist peacefully on a common canvas.

I don't want a web-top, but I want to manage the full stack of PC capabilities in an optimum user experience as simply as I can change the pages/style-sheet of a web-page.  I want web-services to be the backend of my virtualized PC.  I want heavy lifting to be done by the cloud, mass storage in the cloud, etc. -- A very smart person told me that Bindings are cheap in the virtual world, it's when you bind the virtual to the physical that things get expensive. Would that make a webtop in your definition cheaper ? - Yes, it would; but I seriously feel it would be at the cost of the experience-- I want my bindings to be orchestrated by the network - but actually done on my device, not on a web-page.


Wil did a nice job re-articulating what it is he values, but I'm most interested in hearing from you - Wanna WebTop ?

Posted by David Stafford at 10:52 PM No comments:

Since you're reading this, I need to assume you either can't get into Psystar's website or else you've already ordered your "Open Computer".

A colleague of mine recently made a statement that made my ears perk up - "What Microsoft needs to do is make a PC with a version of Windows locked to only run on that hardware." - He obviously was drawing to the conclusion that the success, stability performance and dare I say "wow factor" of Apple's Mac was the result of being able to control the experience end-to-end.  Don't agree with me ? - Read the Steve Jobs article in Fortune where he says just that.

I thought about this odd request for a few moments and then hit the reply button.  "They already have!", I exclaimed.  "It's called XBox/Xbox-360!"

There have been attempts close to this in the past.  I actually bought the very first Windows CE handheld computer (Compaq PC Companion C140) but that wasn't actually Microsoft's hardware. (Cassio & Compaq were identical, Phillips was much better)  The early TabletPC's were Toshiba reference designs, HTC is clearly the leader in Windows Mobile (and Android) smartphone devices. - But the only time Microsoft has produced hardware with an accompanying OS that I can think of is their failed home networking lineup (WindowsCE based, not Linux), XBox & Zune.

How many BSOD's have you seen on XBox ? How many bricked Zune's ? - Something tells me Microsoft can produce a solid platform if they reduce 3rd party variance.

Sorry for being so quiet lately - Alex has been keeping me busy and this post alone took 3 times longer because he's been trying to put nose-prints on my MacBook Pro's LCD (anyone that knows my aversion to fingerprints can imagine my displeasure).

Onya Cobbers !
Posted by David Stafford at 5:59 PM No comments: 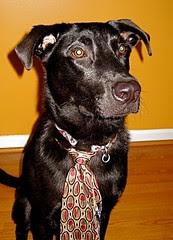 With 2008 off to a terrific start, we are pleased to share a recent addition to the Stafford family organizational structure.

Effective April 3rd, 2008 Alex L. Stafford has accepted the position of Chief Canine Officer (CCO) reporting directly to co-CEO's Kristen Stafford and David Stafford. Alex will initially have responsibilities including "sit", "stay" and "come" and will expand his CCO role to include the retrieval of tennis balls with a stretch goal of newspaper retrieval in the next three months.

Alex comes to us with over 10 months lab-mix experience in various puppy roles. Prior to joining the Stafford family, Alex, under his alias "Lightning" was one of 11 members of 2nd Chance Pet Adoptions in Raleigh, NC where he most recently reported directly to Sarah Miller, foster mom and NC State Veterinary school student. Under Sarah's leadership Alex has demonstrated progressive capabilities from house-training to crate-training and the ability to chew up toys of inferior quality.

Prior to his 5-month tenure at 2nd Chance, Alex could be found trying to further his education while roaming the campus of NC State University.

Please join us in welcoming Mr. Alex L. Stafford to our team!

Dave & Kristen
Posted by David Stafford at 4:17 PM No comments: 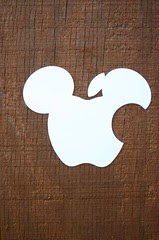 I've just discovered what appears to be a small, but growing Internet subculture.  The world of the Mickeytosh.  People from all over the world are posting and discovering the Mickeytosh logo.

Since I've gone suddenly dormant (stay tuned - there is a good reason and I'll be sharing it this week) - I wanted to make my contribution to the blogosphere alerting everyone to be on the lookout.

Don't bother running to snopes.com - I'm not asking you to forward this to everyone you know, the Mickeytosh logo is *not* associated with any known gangs in the Raleigh/Durham area and I don't think it's breaking any trademarks either ;-)
Posted by David Stafford at 2:39 PM No comments: